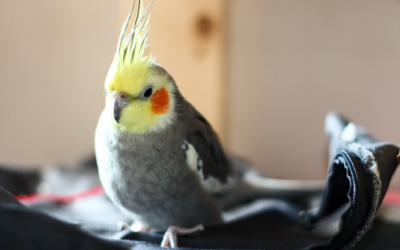 Chronic egg-laying occurs when a female bird lays one egg after another or lays repeated clutches of eggs. This is particularly common among pet birds that live without mates and that therefore lay infertile eggs.

"Chronic egg-laying may lead to malnutrition from the chronic depletion of calcium from the body for the production of eggshells."

Chronic egg-laying may lead to malnutrition from the chronic depletion of calcium from the body for the production of eggshells. In time, calcium depletion may result in egg binding (see handout "Egg Binding in Birds").

Do certain bird species tend to be chronic layers?

The answer is not fully known. However, something stimulates these birds to lay more eggs than normal, or more frequently than normal. A lack of hormonal feedback to a bird’s brain, telling the bird to stop laying eggs, likely occurs in chronic egg-laying birds. Removing eggs that are already laid may induce birds to lay even more eggs, depending on the birds’ species.

Some birds, such as budgies, are called determinate layers. This means that if they are meant to lay four eggs per clutch, they will only lay four eggs, no matter what.  Others, such as cockatiels, may lay one egg after another continuously, particularly if they are not actually sitting on recently laid eggs, or eggs are removed from their nest. These birds are called indeterminate layers. The number of eggs laid has to do with the bird’s brood patch - the bare skin on a bird’s abdomen that transfers body warmth to the eggs during incubation. The tactile sensation in this transfer lets the layer know she has reached the appropriate number of eggs.

Are there any health problems associated with chronic egg laying?

Egg-laying uses up a great deal of the bird’s body stores of calcium not only to make eggshells, but also to help contract muscles and stimulate nerve conduction to push eggs down the bird’s reproductive tract. For birds on healthy diets, this is not a problem, as calcium from the bird’s diet can replace depleted body stores. However, birds eating all-seed, calcium-deficient diets may not be able to replace these depleted stores quickly enough, and they may suffer from an overall lack of body calcium (hypocalcemia). Hypocalcemia can lead to egg binding, seizures, and even death.

Are there any other problems associated with chronic egg laying?

Birds that lay eggs chronically are often less friendly when they are under the powerful influence of reproductive hormones. They may act more aggressively and become more vocal, as they protect their clutch. They may also become more cage-protective and territorial.

What can I do if my bird is a chronic egg-layer?

If these steps don't work, are there any medical treatments for chronic egg-laying?

For chronic egg-layers that have been laying so long that they are debilitated, or for egg-laying birds that have developed problems laying, such as egg binding, medical therapy may be needed. Birds in these situations should be examined by your veterinarian as soon as possible. Your veterinarian may want to administer leuprolide acetate hormone injections to try to stop egg-laying temporarily. These injections are very safe and generally do not have significant side effects. However, birds typically stop egg-laying for only 3-4 weeks, and injections need to be repeated to have continued effectiveness. For some egg-layers, this is enough time for them to recover and replenish depleted body stores of calcium.

For other birds in which egg-laying needs to be halted for longer periods, your veterinarian may perform a simple surgical procedure, in which an implant is placed under the bird’s skin, over its back. The implant contains deslorelin, a hormone that is slowly released over a period of weeks to months to inhibit further egg-laying. The duration of this inhibition varies depending on the bird’s species and her specific hormonal patterns, but in general, it lasts an average of 3-6 months or longer.

As a last resort, if deslorelin fails to stop egg-laying, veterinarians can permanently prevent egg-laying by performing a hysterectomy (removal of the reproductive tract); however, this surgery is not commonly performed due to the significant risk (including death) that it entails. Owners of chronic egg-laying birds that require treatment to stop egg-laying should speak to their veterinarian to determine the best course of treatment for their bird.

© Copyright 2021 LifeLearn Inc. Used and/or modified with permission under license.